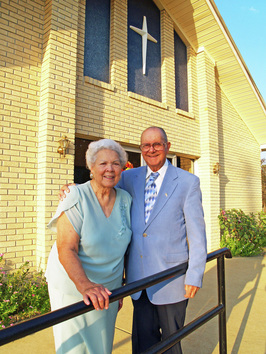 Rev. Langford was the youngest of six children born to John and Carrie Magaha Langford. As a young child growing up in Castleberry, Alabama, he would practice his future sermons on a whole lot of different tree stumps! When he was 12 years old, the family moved to Pensacola, Florida where they attended the Pensacola Baptist Temple.

Rev. H. U. Mullins, Bro. E. L. Gillentine, and Bro. Heuy McWaters played a very important role in Rev. Langford dedicating his life to the ministry. On October 31, 1945, the Pensacola Baptist Temple licensed him to preach.

A move to Arizona was required due to his father's illness. On April 5, 1946, he married his childhood sweetheart, Lenna Purvis, and two days later they left for Arizona with his parents. God worked miraculously in their meeting Rev. Joe Norris, a cousin of Dr. J. Frank Norris. Rev. and Mrs. Langford worked in South Central Baptist Church in Phoenix, Arizona with Rev. Norris for four years as an assistant and song leader. They moved to Fifth Street Baptist in Temple, Arizona where Rev. Langford was Pastor for two years. On May 2, 1952, the Lord led Rev. and Mrs. Langford back to South Central Baptist Church where he was ordained to preach. Rev. Norris resigned in 1956 and the church called Rev. Langford as pastor. The Lord blessed their ministry, but in 1957 Rev. Langford resigned and moved his family (his mother, wife, and 5 children, Jimmy, Karen, Nina, David, and Lana) back to Alabama.

In March 2009, Rev. Langford was called as interim pastor at Enon Baptist Church. On March 7, 2010, Enon called Rev. Langford as their full time pastor. On October 31, 2010 Rev. and Mrs. Langford will celebrate their 65th anniversary in the ministry. We know not how many souls have been saved through their ministry, but we do know that true and faithful servants will reap many rewards from God.